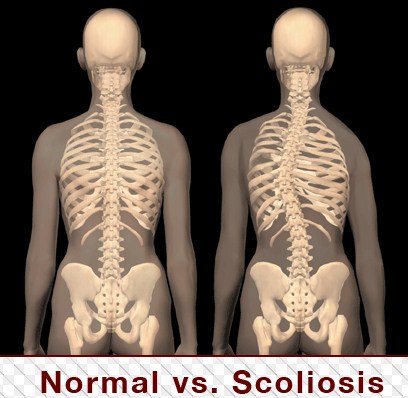 Scoliosis is a disorder in which a person’s spine curves to either the right or left side of the body in an abnormal manner. The spine is naturally somewhat curved, but it should normally appear straight up and down when viewing it directly from the front. Scoliosis patients will have a moderate to severe curvature, with the twisted spine forming an “S” or “C” shape.
Development of scoliosis can happen at any age, but it is most common after the age of ten and is almost two times more likely to be found in girls rather than boys. Scoliosis affects about six million people in the U.S., but only a small percentage has a severe enough case to require extensive treatment.
There are two classifications: structural and nonstructural. Nonstructural scoliosis produces a curve in the spine without actual rotation, meaning that the condition was caused by a muscle spasm or a similar type of pain and it is able to be reversed. Structural scoliosis involves a curved spine with rotation, having developed for unknown reasons and causing the condition to be irreversible.

Patients suffering from scoliosis tend to constantly have the feeling of being “off balance.” They may have difficulties with walking, standing, or running. The outward curve of the spine can also result in patients hunching and being unable to stand up straight.

Studies have shown that there are many causes associated with scoliosis. Even though the condition is more prevalent in girls than boys, both genders are susceptible to developing symptoms. In some cases, scoliosis has been linked to genetics, with people being an estimated 20% more likely to develop the disorder if a family member already has been diagnosed.
One type of the disorder is congenital scoliosis, which is caused by bone abnormities and can be diagnosed directly at birth. Another type, neuromuscular scoliosis, is caused by an abnormality in the body’s muscles or nerves. People with already existing conditions, such as cerebral palsy or paralysis, can develop neuromuscular scoliosis.
The most common type of the disorder is idiopathic scoliosis. Idiopathic scoliosis is the diagnosis given to over 80% of scoliosis patients, all which have no specific cause associated with developing the condition. Research supports that this type of scoliosis may have a strong link to heredity.
Degenerative scoliosis can also develop from traumatic injury, osteoporosis, or  back surgery. This type of scoliosis is mostly found in older patients, due to abnormal degeneration of the joints and intervertebral discs within the spine.
Additional factors may play a role in the development of scoliosis. Some patient cases have been associated with internal biological factors, irregular coordination skills in the development of children, and physical abnormalities within the body, which make the spine susceptible to distortion.

Treatment for scoliosis is critical, because if the condition is neglected the spinal distortion could worsen. The goal of treatment for any scoliosis patient is to minimize the symptoms of the disorder, prevent any progression of the illness, and improve quality of life.
Most treatment plans will be based on the severity of the patient’s condition and incorporate a wide variety of therapies to increase positive outcomes. Traditional types of treatment recommended for scoliosis are physical therapy, and daily bracing of the back.
Surgical treatment is typically recommended as a last option if other therapies are not found to be effective or for those patients with such a severe curvature that surgery would be needed to avoid further complications.

Scoliosis is a condition that causes a person’s spine to curve in an abnormal “C” or “S” shaped pattern. This disorder afflicts millions of people in the United States, but is found to be most prevalent in adolescent girls. There are many causes for scoliosis, most of them stemming from other biological, musculoskeletal, or degenerative conditions. Evidence has also been found linking scoliosis to heredity. A combination of treatments, such as medication and bracing has been shown to minimize symptoms and improve daily functionality for the patient. In more severe scoliosis cases, surgical treatment is sometimes recommended.